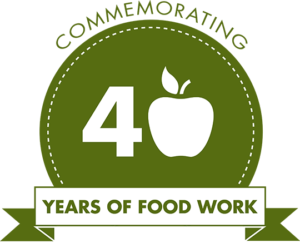 This article first appeared in the May/Jun/Jul 2016 issue of The Voice.

In May, 1976, the call went out to congregations across Greater Des Moines: we need your help to end local hunger.

Many aspects of our work have changed over the past 40 years, but our mission remains the same. We are still dedicated to ending hunger in our community, and we still rely on our member congregations to help us do so.

As we mark our 40th year of food assistance work, DMARC would like to thank the countless volunteers and donors who have made this work possible. The DMARC Food Pantry Network would not be able to function without community volunteers, on whom we have relied from day one.

What started in a church basement has grown to become the largest Food Pantry Network in the state of Iowa. Our community has consistently shown throughout the years that when we all work together, we can accomplish some incredible things. 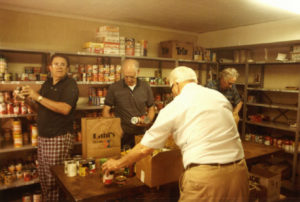 DMARC’s Department of CROP and Other Human Needs had been aware for some time that community food needs were not being properly met, and that it was time to take action. Under their recommendation, the “Emergency Food Pantry” resolution was adopted by DMARC’s Administrative Cabinet on February 17, 1976.

The first congregation food drive was held that May. 17 congregations participated, donating 847 food items and $57.71. The food was stored in the basement of Kirkside, a large house located at 3807 Grand Avenue, DMARC headquarters at the time. Later that year, the pantry “warehouse” was moved just down the street to the basement of Central Presbyterian Church.

Over the next few years, contributions of food and cash donations to the Emergency Food Pantry increased, but so did the number of hungry people seeking food. 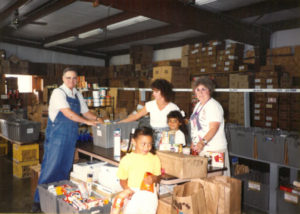 In the early 80’s, it became evident that a new department should be created within DMARC, specifically focused on the Emergency Food Pantry. In December, 1982, the Department of the Emergency Food Pantry was formed, with Earl Holst selected as its first chairman. Holst, a small business owner and regional officer in central Iowa Kiwanis clubs, had been a volunteer in the food pantry since 1979.

In the summer of 1986, DMARC moved headquarters to 3816 36th Street, and two important decisions were made that would impact the future of the Emergency Food Pantry.

First, a new warehouse must be built, because no food storage space was available at the new headquarters.

Second, a part-time director should be hired to manage the pantry supervisory work. Until that point in time, the pantry had been entirely volunteer-run. 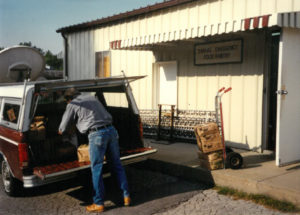 DMARC’s old warehouse on 36th Street was funded by Des Moines area Kiwanis clubs and was completed in 1986. Photo taken 1994.

Once the building was complete, it was ready to welcome the first pantry director, Charles Schachterle. The new warehouse and director could not have come at a more opportune time.

Economic downturn in the late 1980’s led to a large increase in demand, and DMARC began exploring ways to gather donations from other sources throughout the community.

This prompted the launch of the Red Barrel Program in April, 1990. Bright red barrels decorated with “STOP HUNGER” signs popped up in supermarkets throughout the area. Kiwanis clubs of Des Moines again played a vital role in starting this program. 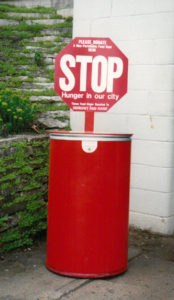 Ray Hock and Fran Bobzin both served as Food Pantry Directors in the years of 1990-1992, with Charles Ryan taking the position in September of 1992.

The flood of 1993 was a true test for DMARC’s Emergency Food Pantry. Hundreds of residents were suddenly left homeless, with no access to food. DMARC saw food resources pour in from across the nation, and the pantry distribution system passed its most rigorous test it had ever faced. In the year of 1993, DMARC served a total of 95,448 individuals- more than the pantry system would serve for another 10 years.

Charles Ryan resigned as Food Pantry Director in 1995, with Sister Sandra Rodemyer taking over. To this day, many individuals share fond memories of volunteering in the food pantry warehouse with “Sister Sandy.”

From 1994 -2001, food pantry usage hit a plateau. This period of relative stability can be attributed to the economic boom of the 1990’s.

Then, at the start of the new Millenium, the economy took a downturn. Over the next three years following 2001, the DMARC Emergency Food Pantry saw a 30% increase in the number of people it was serving.

Sr. Sandy Rodemyer retired at the end of 2007, just before Iowa and the rest of the nation would suffer their greatest economic recession since the Great Depression. 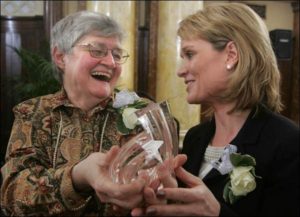 Jim Trotter served as Food Pantry Director from 2007-2010. During this time, many families in Greater Des Moines turned to utilize a service to which they had previously donated.

In 2008, DMARC’s Emergency Food Pantry was renamed as the DMARC Food Pantry Network. The system had always existed as a network of pantries, and the new name aimed to be more reflective of this.

Elisabeth Ballstad began as Food Pantry Director in 2010, the same year DMARC purchased a van to haul food. Prior to this, transportation for food was provided entirely by
volunteers and other organizations.

Over the next few years, DMARC would take large strides in re-examining how it was providing food to our community and finding the most effective ways to get food where it needed to be.

The following year, 2011, the MovetheFood initiative was launched to address the entire food system in Des Moines. Two large trucks were purchased to aid in this effort.

In addition, DMARC took another look at the type of food we were providing our clients. After a study conducted by Iowa State found that our pantry clients were three times as likely to have diabetes than the general population, we knew changes must be made.

Rebecca Whitlow took over as Food Pantry Network Director in 2012, and still serves in that role today. Whitlow has been involved with DMARC almost her entire life, and has a natural passion for our work.

Most of DMARC’s partner pantries converted to “choice” pantry models during this time period, allowing clients to select their own food items as a volunteer assisted them. Choice pantries provided a new level of dignity and respect for those seeking help.

With all these changes, it was clear that DMARC had outgrown its warehouse. After searching for a new possible location, a spot was chosen near downtown Des Moines. 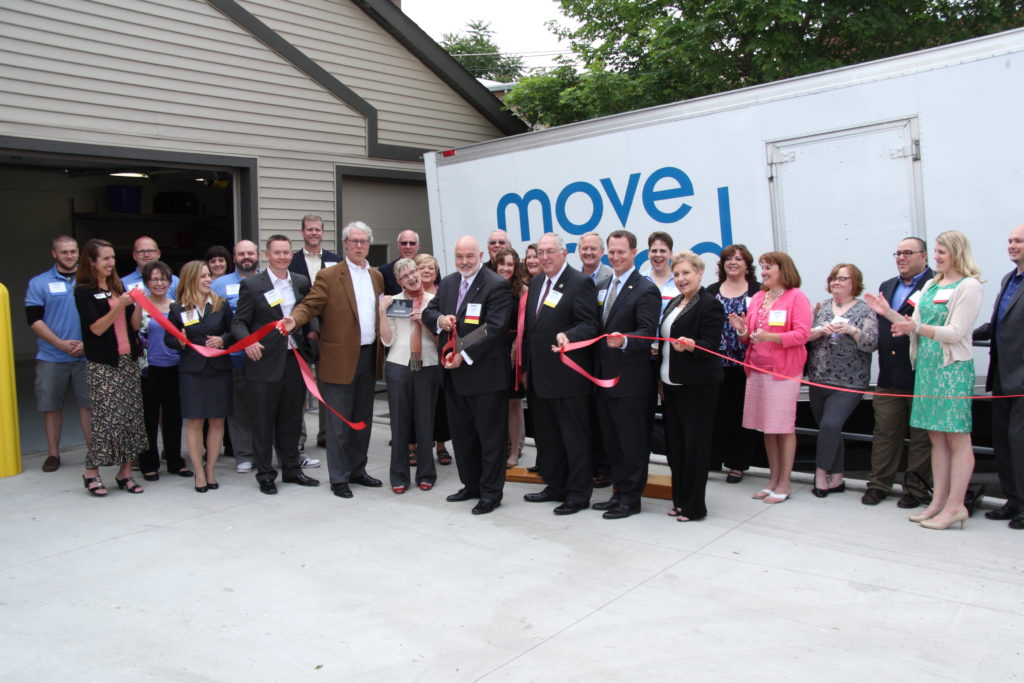 In January of 2014, DMARC moved into its current home at 1435 Mulberry Street. The renovated building houses an administrative office adjacent to the new 6,000 square feet warehouse. The new facility features a pit-dock, walk-in freezer and cooler, a pallet racking system and an electronic pallet jack, and overall a much more expansive, efficient and safer storage space.

Today, DMARC is serving more people than we ever have before in our 40 years of food assistance. We continue to find underserved areas, parents still going to bed hungry because they can’t afford to feed both themselves and their children.The fight for food security is far from over, but we are not in this endeavor alone.

Through it all, we have known we can count on you to help us feed our neighbors. We thank our congregations, partner pantries, volunteers, donors, DMARC board members and employees past and present, and the entire community of Greater Des Moines. We feel truly grateful to call such a giving, helpful place home.

No Replies to "Commemorating 40 Years of Food Assistance"