Get to Know Phil Kiwayiele 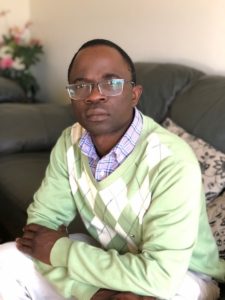 Phil was born and raised in Brazzaville, Congo, before travelling to France for studies at the University of Aix-Marseille II, where he obtained his Master’s degree in International Economics. His dream was to complete a Master’s degree in Business Administration with a concentration in Accounting. He was accepted at Linwood University in Saint Charles, Missouri, where he finally realized this dream.

He is a married father of two daughters, Priscillia and Faith, who were both born in Saint Louis, Missouri. In July 2013, Phil and his family moved to Des Moines.

In his free time, Phil likes to go for walks, ride his bike, and play outside with his girls. He also enjoys helping others, and has served the community for many years through tax preparation for low-income families.

Phil was drawn to apply to DMARC because of its mission and values, and wanted to be a part of an organization that has an impact every day in the lives of people who are facing food insecurity. He enjoys having a career where he can combine his analytical skills with his desire to assist and serve people.

No Replies to "Get to Know Phil Kiwayiele"